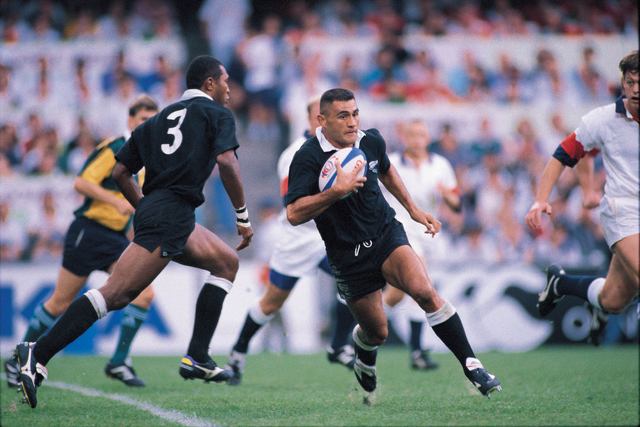 In a glittering sevens career, Rush, alongside Fiji’s Waisale Serevi, was the face of the Hong Kong Sevens throughout the 1990s, playing in Hong Kong on an amazing 16 occasions and claiming the Cup on nearly one-third of those outings.  His five tournament wins in Hong Kong include a purple patch of three straight Hong Kong Sevens titles from 1994 to 1996 as well as victories in 1989 and 2000.

He won the Leslie Williams Award for the Best & Fairest Player of the Hong Kong Sevens in 1991.

Overshadowing his nine test caps for the All Blacks and participation in nearly 30 matches with New Zealand, Eric Rush’s reputation as a rugby great is built on his career as one of the world’s foremost practitioners of modern sevens.  Rush played in nearly 60 international sevens tournaments, and helped New Zealand win gold at the Commonwealth Games in 1998 and 2002 and at the 2001 Rugby World Cup Sevens.

With pace to burn, superb conditioning and unique pitch vision arising from his fifteen-aside experience as both a flanker and a wing, Rush brought an exceptional level of leadership to the New Zealand Sevens teams as a captain, helping to maintain New Zealand’s commitment to excellence through several generations of players.

Rush also distinguished himself as a member of the New Zealand Maori sides, playing in the 1988 tour of France and Argentina and in a total of 14 matches to 1991. After his move to the wing in 1992, Rush represented the New Zealand Maori on another 14 occasions including a fixture against the British & Irish Lions in 1993.

A qualified lawyer, Rush’s natural wit, intelligence and bright personality has seen him in high demand as an after-dinner speaker and in rugby circles he is nearly as well regarded for his role officiating the Hong Kong Sevens Long Lunch as for his exploits on the pitch at the Hong Kong Stadium.

Rush’s sevens fame has seen him acclaimed as an international star and over many seasons Rush has been invited to play for the British Barbarians in high profile festival games in the United Kingdom.

Rush will no doubt go down as one of the seminal players in sevens rugby and Hong Kong Sevens history and his inclusion in ‘The Hong Kong Magnificent Seven’ was always assured.