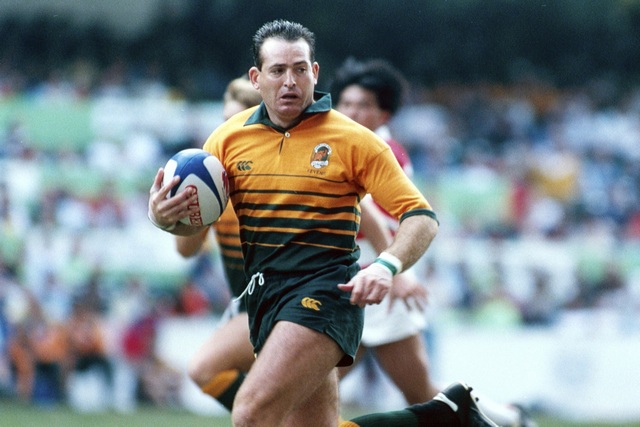 The Hong Kong Rugby Football Union (HKRFU) has announced Australia’s David Campese as the fifth member of ‘The Hong Kong Magnificent Seven’, the HKRFU’s commemorative campaign to recognise the seven most formative players to have played in the past 40 Years of Sevens in Hong Kong in 2015.

Campo is truly one of a kind. The player who trademarked the goosestep was not as successful at sevens as he was at fifteen-a-side – 101 appearances for Australia and a then-record 64 international tries – but his contribution to the game of sevens and the Hong Kong Sevens was huge.

In 1983, Campese made the first of a dozen appearances in Hong Kong (1983-90, 93-94, 97-98). The Wallabies star lit up the tournament, helping Australia defend its title from the previous year in some of the wettest conditions ever recorded in Hong Kong in March.

He would go on to capture two more Cups, in 1985 and 1988 – the last occasion Australia took the top silverware. Campo was as influential in his final match as he was in his first. He won the Leslie Williams Award for player of the tournament in 1988 and ten years later still had pace aplenty to run in tries for Australia.

Campese would bridge generations of powerful Wallaby sides in Hong Kong, from the Mark and Glen Ella, John Maxwell and Simon Poidevin sides of the 1980s to playing alongside Michael Lynagh, Jason Little, Tim Horan and George Gregan in the 1990s.

Campese said on several occasions that he had played his last match for Australia at Sevens but he was convinced to come out of semi-retirement to lead an inexperienced Wallabies team to the Commonwealth Games in Malaysia in 1988. He proved an inspiration and the old head guided the young guns to a bronze medal, a fitting finale to a great sevens career spanning more than a decade.