“LKF Sevens Carnival” will be held at Lan Kwai Fong 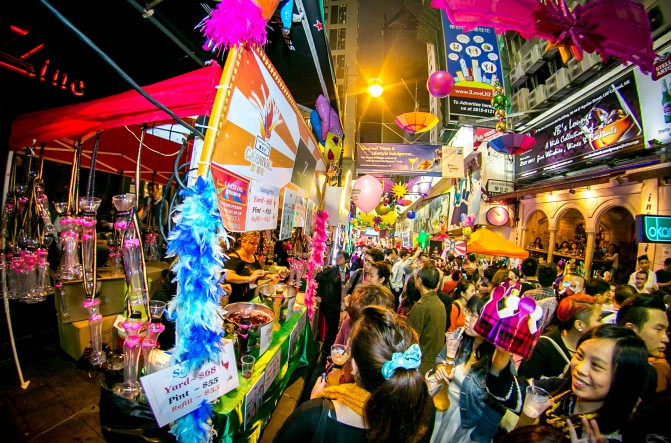 The Hong Kong Rugby Football Union and the Lan Kwai Fong Association are pleased to announce the hosting of the first ever “LKF Sevens Carnival” which will be held in Lan Kwai Fong, Hong Kong’s premier dining and entertainment area, on Tuesday, 24 March 2015, from 8pm to 11pm.

The carnival will feature a variety of activities to kick off the world-famous revelry of Rugby Week in Hong Kong in 2015.

The highlight of the Carnival is a parade featuring international rugby legends, HKRFU and sponsor mascots and the masters from the Kung Fu Rugby performance at the Hong Kong Stadium during Sevens weekend. Celebrity presenters from NOW TV, the official host broadcaster of the Cathay Pacific/HSBC Hong Kong Sevens, will also take part in the Carnival.

Also marching in the parade will be members of the Hong Kong men’s and women’s national Sevens teams. The parade will run from 8.45pm to 9.15pm.

Former Scotland international Andy Nicol will serve as the Grand Marshal for the parade.

The Carnival will also include live musical performances sponsored by HSBC featuring the Red Hot Chili Pipers, the world’s most famous bagpipe band.

Rocketing to fame after winning the BBC Prime Talent show ‘When Will I Be Famous’, the Red Hot Chili Pipers have reached incredible heights with their ground-breaking fusion of traditional Scottish music and rock/pop anthems that they proudly call ‘Bagrock’.

The Red Hot Chili Pipers have sold hundreds of thousands of albums worldwide. Their debut album, ‘Bagrock to the Masses’, achieved Gold disk status after selling over 100,000 copies, while their third album and DVD ‘Blast Live’ went triple platinum. They have twice been named the best live act in Scotland and their cover of the Avicci track ‘Wake Me Up’ has recorded over two million views on YouTube.

The Pipers are no strangers to rugby events either, having appeared at the Rugby World Cup, the Commonwealth Games and at Scotland rugby matches. The band has over 250,000 Facebook followers and their infectious style of feel-good music appeals to all ages, all around the world.